The forces coming from within the earth and causing horizontal and vertical movements are known as Endogenetic forces. It is these movements which lead to land upliftment and subsidence, folding and faulting, earthquakes and volcanism, etc. Endogenic forces are responsible for giving birth to major relief features such as mountains, plateaus, plains , valleys , etc. These endogenic forces fall into two major categories, on the basis of intensity:

1. Sudden movements: Sudden movement  result into sudden and rapid events such as earthquakes and volcanic eruptions. It must be noted that these events are the result of long-period of preparation deep within the earth. Only their effects in the form of earthquakes and volcanic eruptions are experienced as sudden events. These are also termed as constructive movements as they produce certain relief features such as volcanic mountains and lava plateaus ( e.g. Deccan )

2. Orogenetic movements: These  movements are caused by the endogenic forces working in horizontal manner and they involve folding, bending, faulting , and thrusting. These endogenic forces also known as tangential forces. They are of two types :

Folding is a process in which the rocks bend instead of breaking when they are subjected to forces generated by tectonic movements. Also folding occurs due to horizontal compression of rock layers by internal forces of the earth. Accordingly this can create a variety of land forms as the surfaces of the folded rocks are eroded in due course of time. Folds are outcome of slow deformation of rocks. Folding takes place in deep underground where the rocks are under pressure and temperatures are higher. Folded rocks are common in mountain ranges like the Alps, Himalayas and the Scottish Highlands. Up-folds are called anticlines. As shown in the above diagram folds are of varoius types namely – symmetrical, asymmetrical, overfold, recumbent fold etc. Some other types of folds are :

When the tensional force is moderate, the crustal rock develop only crack (Fractures) but when intense tensional force work the rock beds are dislocated and displaced also resulting into formation of faults. Thus faults are those fractures in the rock body along which there has been an observable amount of displacement.

Rift valley: A linear depression or through created by the sinking of the intermediate crustal rocks between two or more parallel faults is known as a rift valley. The East African rift valley  system and Rhine rift valley are  famous examples of these morphological features. Dead sea , the second most saline lake in the world after lake Van is situated in a rift valley. Narmada and Tapti , rivers are believed to be flowing in a rift valley.

Ramp valley: When both the side block of rocks are raised and the middle portion remains standstill , the resultant trough is known as a Ramp valley. Brahmaputra valley is regarded as a Ramp valley. The best illustration of a ramp valley system is the Turfan Depression, the second lowest place on Earth (154 metres below sea level), which lies within the Tien Shan of western China and along the northern margin of the Gobi.

Block mountain: Also known as fault block mountains, these mountains are  the result of faulting caused by tensile and compressive forces. They represent the upstanding parts of the ground between two faults or on either side of a rift valley. Noted examples are Vosges and Black Forest mountains bordering the faults Rihne rift valley, Wasatch range in USA and sierra navada mountains of California (considered to be the most extensive block mountain of the world).

Earthquakes are vibrations of the earth caused by ruptures and sudden movements of rocks that have been strained beyond their  elastic limits.

Earthquake can be considered as a form of energy of wave motion transmitted through the surface layer of the earth. The place of origin of earthquake inside the earth is known as Focus or Hypocentre.

Epicentre: It Is the point on the earth surface vertically above the focus where shocks wave reach the first . It is the most affected area.

Seismograph: It is an instrument which records the waves generated by an earthquake.

Causes of the earthquakes

Volcanic Eruptions: All volcanic eruptions create vibrations that are manifested in the form of earthquakes.

Faulting : Create strains in the underlying rocks which beyond a certain point fracture creating earthquakes.

The terms volcano and volcanism canote different things in the earth sciences. A volcano is an opening in the crust of the earth, connected by a conduit to an underlying magma chamber , from which molten lava , volcanic gases steam and Pyroclastic material are ejected. While volcanism (vulcanicity) includes  all the processes and mechanisms related to the origin of magma, gases, vapour etc., their ascent and appearance on the earth’s surface in various forms.

On the basis of mode of eruption

Central eruption or explosive type: It occurs  through a central pipe and small opening by breaking and blowing off crustal surface due to explosive magma and gases. This type is future  sub-divided into:

Fissure Eruption or Quiet Type of Volcanose :  it occurs along a long fracture, or fault and fissure through  slow upwelling of magma. It leads to formation of thick lava plateaus, Deccan plateau, Columbia plateau (USA), Antrim plateau (North Ireland) etc.

Types of volcanoes on the basis of periodicity

Types Of Volcanoes Based On Shapes

Whenever their is magma eruption at the surface as lava, it can form different types of volcano depending on:

Volcanoes can also be classified on the basis of shapes. The most well-known types of volcanoes are cinder cones, composite volcanoes (stratovolcanoes), and shield volcanoes.

Shield volcanoes : Have broad rounded shape and are the largest. The largest of all volcanoes on Earth is Mauna Loa. It covers a substantial part of the Island of Hawai‘i and has a diameter of nearly 200 km. The summit of Mauna Loa is presently 4,169 m above sea level, but this represents only a small part of the volcano. It rises up from the ocean floor at a depth of approximately 5,000 m. Most shield volcanoes are formed from fluid, basaltic lava flows and produces low viscosity, runny lava, that spreads far from the source and forms a volcano with gentle slopes.

Composite Volcanoes (stratovolcanoes) : They have slopes that get steeper near the top of the volcano. A classic composite volcano is conical with a concave shape that is steeper near the top. Cotopaxi is a classic example of Composite Volcano as consist of layers of lava alternating with layers of tephra (blocks, bombs, lapilli, and ash). Composite volcanoes are active over long periods (tens to hundreds of thousands of years), and erupt periodically. They tend to form relatively quickly and do not last very long. If volcanic activity ceases, it might erode away within a few tens of thousands of years. This is largely because of the presence of pyroclastic eruptive material, which is not strong. Mt. Fuji is another example of this but it expels Basaltic lava.

Cinder Cones (Spatter Cones): Technically known as scoria cones, Cinder cones are the most common type of volcano in the world. They have straight sides and are typically less than 200 m high. They can be eroded away easily, and relatively quickly because cinder cones are made up almost exclusively of loose fragments. Thus they have very little strength. Mt. Capulin, is a classic example of this type.

What is the example of Endogenic forces?

It is a slow and gradual process of large-scale deformation of Earth’s crust by natural processes, which leads to the formation of continents and ocean basins, mountain systems, plateaus, rift valleys, 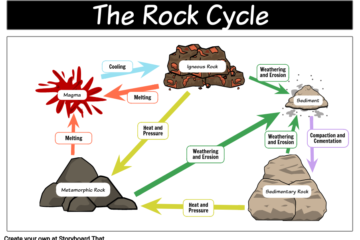 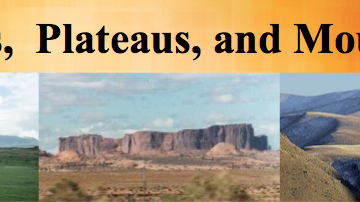