Study of Indian geography is intriguing as well as interesting because of the fact that it is as diverse and varied as the culture of India. Indian geography has its own uniqueness because it has almost all types of landscapes, topographies, vegetation and climates. Thus Indian geography has to be studied in various categories namely – Geology, Physiography, Drainage System, Climate, Vegetation, Soils, Flora, Fauna and Economic and Human Geography. In this article we shall be focusing on Geological and Physiographical aspects of India.

India that is Bharat , has been a distinct geographical and geopolitical unit since ancient times. Bounded by the young folded mountains in the north-west, north and north-east and washed by the waters of the Indian  oceans in the south , India occupies the most important part of the south Asian realm. India is the only country after which an ocean has been named, that is Indian ocean. This region may gain geopolitical and geo-economic importance in the near future, if organised on the pattern of Asia pacific region or European Economic Community.

India is the 7th largest country in the world after Russia, China, Canada, USA, Brazil and Australia. India commands a total geographical area of 3287263 square km. Which is roughly 0.57% of the area of the earth and 2.4% of the total area of the land. This 2.4% of the land area is occupied by 16%  of the world population making India second most populous country in the world. India has roughly a quadrangular shape. It measures about 3214 km , from north to south and about 2933 km from east to west . So, the north-south extent is 281 km more than the east-west extent. Thus the size and shape of India is a unique feature of Indian geography.

India lies in the northern and eastern hemisphere of the globe between 804’ north and 3706’ north latitudes and 6807 east and 97025’ east longitudes. IN front the southernmost extent goes up to 6045’ north latitudes to cover the last island of the Nicobar group of island know as Pygmalion point or Indira point. With almost 300 of longitudinal extent the country may be divided into two zones but India has adopted only  one standard meridian that is 82030’ east longitude to determine Indian standard  time (5 ½ hours ahead of G.M.T.). The tropic of cancer divides the country into two equal halves  the southern halves falling under the torrid zone and the Northern halves forming a sub-tropical zone.

India’s neighbors  include Pakistan and Afghanistan in  the west, China, Nepal and Bhutan in the north and Bangladesh and Myanmar in the east. In the south narrow Palk strait separates the Indian mainland from Sri Lanka. The total land frontier of India is 15200 km. Apart from that India has a mainland coastline of 6100km and total coastline 7516 km. (including the coastline of Andaman Nicobar and Lakshadweep island)

This region of India is marked by the lofty ranges of Himalayas extending all along the northern frontiers of the country, from eastern boundary of Pakistan to borders of Myanmar. Himalayas, the abode of snow, represent the youngest and highest folded mountains in the world. Longitudinally Himalayas consists of three parallel ranges from north to south. The Himalayas mark the crown of Indian geography.

The Eastern Hills or Purvanchal

This 560 km long stretch of the Himalayas lies between the Indus and Saltuj rivers. Karakoram, Laddakh, Piri- Panjal, Zaskar and Dhauldhar are the main ranges of this sections while Zozila is the major pass.

It lies between the satluj and kali rivers . General elevation is higher than Punjab Himalayas . Nanda devi , Kamet , Badrinath, Kedarnath, Gangotri are all important peaks of this section. Nainital and Bhimtal are important lake regions of this section.

This sections of Himalayas is situated between the Kali and Tista rivers. Mount Everest, Kanchenjunga, Makalu, Dhaulagiri etc., are located in this section.

Origin : It is almost universally accepted that this vast expanse of Indian geography has been formed as a  result of filling up of a large depression lying between the peninsular and Himalayan region  by the deposits of the river coming from these two land for deep warped down between advancing peninsular block and rising Himalayas.

Geomorphology of the plains

Regional  Division  of  The  Great  Plains

To the east and north-east of Thar desert is Punjab-Haryana plain. Its eastern boundary is formed by Yamuna River. It is characterized by flat , narrow strips of low lying flood plains known as beds , formed by shifting of river courses . This plain formed by deposits of five rivers is called doab. From east to west these doabs are :

Rivers in this plain have caused for themselves broad flood plains of Khadar flanked by bleefs, locally called Dhaya. The northern part of this plain adjoining the Shivalik has been eroded by numerous streams called Chos.

This is the largest-unit of the great plains stretching from Delhi to Kolkata in the straits of Uttar Pradesh , Bihar and West Bengal. Physiographically this plain can be sub-divided into following three divisions :

This part is bordered by the Yamuna in the west and 100 m contour line ( Allhabad-Faizabad railway line) in the east. The upper Ganga plain can be divided into three micro units:

2. Rohelkhand Plain : East of Ganga-Yamuna Doab. It lies entirely in UP and is drained by Rāmgangā, Gomti and Sarda rivers.

It extends from the eastern margin of the Chhota Nagpur plateau in the west to the border of Bangladesh and Assam in the east . Most of these plain is perceived as Deltaic. This plain can be sub-divided into :

The peninsular plateau is roughly triangular in shapes with base coinciding with southern edge of the great plains it covers a total area of 160,0000 km2 ( About half of total land area of the country). The plateaus add another beauty to Indian geography.

It lies east of Aravali range made up of sand stone, shales and limestone of Vindhayan period. The upland is drained by Banas river originating in Aravali range.

Also called the Madhya Bharat Pathar, lying in the east of Marwara upland and drained by Chambal and its tributaries.

To south of Yamuna River between Madhya Bharat pathar and the Vindhyan scarap lands consists of granites and gneiss.

Bonded by Aravali range in the west and Bundelkhand in east and Vindhayas in south. It is an extensive lava plateau in M.P. with black soil drained by a number of north flowing rivers like Betwa, Parbati, Kali Sindh , Chambal and Mahi.

East of Makal range and bounded by Son river on the north.

It is the only plain worth that name in the vast stretch of plateau drained by upper course of Mahanadi . This  saucer shaped depression lies between Makal range and Orissa hills.

Indian Geography – Other Mountains of India

Aravali’s are the world oldest fold mountain running in north east to southern direction from Delhi to Palampur in Gujarat. This mountain is another unique feature of Indian geography. Gurushikhar is the highest peak situated in mount Abu. Piplighat, Dewair and Desuri passes allow movement by roads and railways.

It rises s an escarpment  flauting the northern edge of the Narmada , Son-trough. The vindhyan  are continued eastward as the Bharner and Kaimur hills. This range acts as a water divide between Ganga system and river system of south India. The Maikal range forms a connecting link between vindhya and Satpuras.

It is a series of seven (Sat) mountains running in east-west-direction south of vindhyas and in between the Narmada and Tapi. Commencing from Rajpipla hills in the west through the Mahadeo hills itextends to Makal range in the east. Dhupgarh near Panchmarih on Mahadeo hills is highest peak of Satpuras.

India has a total of 247 islands ( distant island) of which 204 lie in Bay of Bengal and Remaining in the Arabian Sea. The presence of so many islands completes the final dressing of Indian geography.

There are 36 islands of Lakshadweep group of island. Kavaratti is the capital of Lakshadweep. The southern most island Minicoy is separated from Maldives by 8 Degree Channel. These islands are of coral origin. 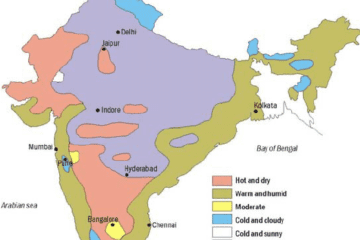